The Central American Country of Belize, formerly known as British Honduras has a population of approximately 280,000 people. It lies roughly between 15º 52’ and 18º 30’ North Latitude and 87º 28’ and 89º 13’ West Longitude and is bordered by Mexico in the North, Guatemala in the west and the Caribbean Sea in the east. It covers 22,963 km2 (8,866 sq ml) of land area (including the approximately 1,000 cays). Belize harbors the largest unbroken Barrier Reef in the Western Hemisphere.

Belize is bordered by Mexico to the north, Guatemala to the south and west, and the Caribbean sea to the east. With 8,867 square miles (22,960 km) of territory and 340,000 people (2009 est.), our population density is the lowest in the Central American region. The country's population growth rate, 2.21% (2008 est.),is the highest in the region and one of the highest in the western hemisphere. Belize's abundance of biologically significant and unique ecosystems contribute to its designation as a biodiversity hotspot.

Belize has the second largest barrier reef in the world, archaic Mayan ruins, tropical rainforest teeming with flora and fauna of Belize, sandy beaches, and much more.  Belize is on the world’s top destination for eco-tours.  Tucked away between Mexico, Guatemala and the sparkling blue waters of the Caribbean sea, Belize explodes with sub-tropical biodiversity, with over 500 species of birds including scarlet macaws, toucans, parrots, hummingbirds, kingfishers, motmots, egrets and wetland birds.  The rainforest is teeming with howler monkeys, spider monkeys swinging amidst the dense jungle beneath the forest canopy.  River otters frolic playfully down streams, while jaguars and ocelots roam at night, while peccaries and tapirs forage the undergrowth for food.   In the rainforest, you’ll find a wide variety of beautiful orchids, lots of palm trees, pine forests, mahogany trees, sugarcane, bird or paradise and mangrove trees.  Abundant tropical fruit such as bananas, mangoes, pineapples, oranges, grapefruit, custard apple, sour sap, cashews, papaya, craboo and coconuts is a delight to fruit lovers. 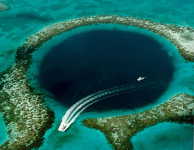 Belize has distinct wet and dry seasons. The wet season runs from mid-May to November in the south and from mid-June to November in the north. November to February is a transitional period, with the year’s coolest temperatures and a limited amount of rain. The true dry season is February to April. There’s quite a large difference in rainfall between the north of the country (around 1500mm or 60in a year) and the south (about 4000mm or 160in). In the north and center of the country there’s a dip in rainfall in August, between peaks in July and September.